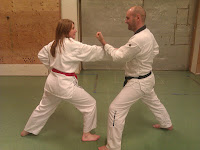 In my last post I wrote about Matchoe Kyorigi and I touched upon something close to my heart and that is "context awareness" in Taekwondo. Machoe Kyorigi (Predetermined Sparring) are often viewed as old fashioned and or outdated combat training. In my view however this is putting Matchoe Kyorigi in a wrong context as I believe it was not originally meant to be used purely as combat training. I quoted a famous Shotokan Karate Master that:
"Matchoe Kyorigi is training to Harmonize with you opponent"


Todays Kukkiwon Textbook (2006 edition) show numerous examples of Machoe Kyorigi (3, 2, 1 step sparring, sparring in seated position both on the knees (traditional formal sitting position) and on a chair, they even show Machoe Kyorigi against sword, club, and bayonet! Unfortunately the book does not go indepth to any degree on Machoe Kyorigi, it jumps from Poomase to Machoe Kyorigi and Machoe Kyorigi is only illustrated with no theory. The Kukkiwon Texbook treats Basic Techniques and Patterns far more detailed than Machoe Kyorigi. From this we could extrapolate that Machoe Kyorigi is somehow less important in the Kukkiwon System of Taekwondo than the other facets of training. Or maybe the writers put a greater emphasis on the things they though needed more emphasis in wich case Machoe Kyorigi was believed to have been understood to a great degree? I think it best to go further back in time to see how the Machoe Kyorigi has been viewed by the pioneers of Taekwondo. 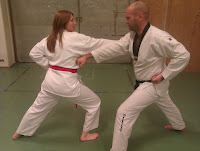 If we first look at "Korean Karate" By Son Duk Sung and Robert J. Clark written in 1968 we are told that Machoe Kyorigi or predermined sparring is the Taekwondo students laboratory to experiment on how to defend and counter attack. Experiences of these "experiments" could later be adopted to free sparring. In his Chung Do Kwan Dojang the Machoe Kyorigi followed the traditional frame set but they were "free" in that the students themselves made their defences and counters to the attacks. He also writes that it has been his experience however that not all defence/counters were usable in free sparring despite seemingly effective in the predetermined sparring. He also makes a point of how one step sparring is very important because it is training for Taekwondo`s ultimate goal in self defense: to end the struggle with one strike!.

Here we see that his view of Machoe Kyorrigi (at least 1 and 3 step sparring) were firmly planted within a combative context. He seem to equate 3 step sparring to a free sparring context and 1 step sparring to a self defense context wich both have their place within "combative context" allthough they are in real life worlds appart. I agree with him wholeheartedly when he writes about important attributes or attributes that can help in free sparring and self defense that can be trained in Machoe Kyorigi: To always look at your opponent no matter what he does and to think "on your feet" (pun intended).

If we go a little further back in time we have General Choi Hong Hi`s book from 1965 wich were a translation of his work from 1957(?) in Korean. Here he presents more kinds of Machoe Kyorigi than Son Duk Sung does:
If we are to judge on this books treatment of the different "pillars" of Taekwondo wich one was most important then Sparring both free and predermined were more important than patterns. Sparring was very well documented in this book and thouroughly illustrated while the different patterns were described using mainly words and directions with maybe none to three pictures to illustrate the patterns. 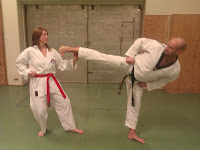 He does by and large agree with Son Duk Sung with the reasons for training Machoe Kyorrigi and the attributes that are being trained, however he makes a point that Machoe Kyorigi is the middle step between basics and patterns on one side and free sparring on the other. He would introduce students to sparring through three step sparring and work his way through them all to semi free sparring before putting the student into a free sparring match. He too gives a lot of examples on the different kinds of sparring but the students were expected to come up with their own as the kind of sparring illustrated in the book only served as examples.

No why do I not just agree with these pioneers and revered masters of Taekwondo? Simply because I do not think they had all the answers (and I certainly do not either), what I have that they did not is the internet and the ability to ask questions from my teachers. The Pioneers lived in a time and culture where asking questions were frowned upon (actually it could get you a severe beating according to some pioneers) and the internet did of course not exist at that time either. Like it or not, we do have an information advantage that the masters of old simply did not have.

If we look at old style Karate before it came to Japan it looks as if Machoe Kyorigi in the form we have now did not exist. Today however it is ever present, a testomony to the fact that after the art was exported to Japan, the Japanese made contributions that found their way back to Okinawa! Now who on earth came up with the Machoe Kyorigi in the form that we have today? Why did he invent the format and where did he draw his inspiration from? That is the golden questions I have been struggling with for some time. 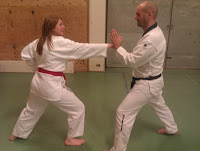 If we are to believe some Shotokan articles on history (I am inclined to believe them) you will find that the man often credited with the creation of Machoe Kyorigi in the present format was Yoshitaka "Gigo" Funakoshi the son of Gichin Funakoshi. It is said that he came up with the Machoe Kyorigi in the present format and that he used his experiences of training in the art of Kendo to do that. It is suposedly a kind of Zen training format and here is where the quote of Kanazama really comes to its right: Training for harmonizing with your opponent. I will try to explain my view of that quote in a future post but suffice to say that historical tidbit is why I do not think Machoe Kyorigi is supposed to be purely combative both in a free sparring match or in a competition setting.

Anja Kyorigi (seated sparring) however is believed to have been invented by Yoshitaka`s more famous father Gichin Funakoshi. At least the kneeling formal sitting position one. This is only a theory but I think that the inclusion of kneeling sparring was one of the first steps of being recognized as a "proper" martial art in Japan. Old school Jujitsu as well as Judo both had defenses and attacks from kneeling position wich was an important sitting position in Japan (maybe more so than in Okinawa and Korea?) and it seems as the earliest illustration show applications from the different Kata (forms) being emplyed in this kneeling position. I think that Funakoshi saw the need for Karate to include them so they could say: "Hey we have those too", and he took what he knew (Kata applications standing position) and adopted them for use in a kneeling position. Another theory is that Ohtsuka who had inherited a system of Jujitsu prior to starting Karate training under Funakoshi helped or even invented this kind of sparring. Personally my money is on the first theory;)

The Korean seems to have taken this and added Machoe Kyorigi from a relaxed sitting position on the ground (what many consider meditation posture), sitting on a chair etc to still preserve what they were given but also to include Machoe Kyorigi in our current time. I have not seen any Machoe Kyorigi in a chair being presented in any Karate book so far so I am inclined to believe this is Korean inovation:-)

Should we still include Machoe Kyorugi if it is proven down the line that it has nothing or little to do with actual combat?


Special thanks goes to Alfred and Inger Marie for posing for the illustrations. Hap Jang.

Email ThisBlogThis!Share to TwitterShare to FacebookShare to Pinterest
Etiketter: Kyorugi, Other