Geom or Do? How language changes in martial arts 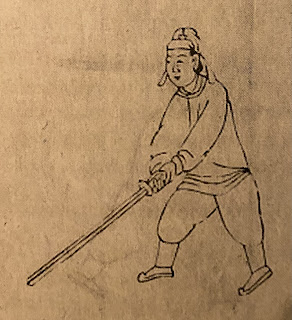 Hi there :-) I have been going full Muyedobotongji rabbit hole these last few months :-P I have posted a lot of stuff on facebook, and one of the things I wrote was that the Sang H. Kim's translation of the Muyedobotongji is a wonderful resource, but it does contain flaws and errors, and the biggest "flaw" for me was that he did not include any Hanja or Hangul for any of the Korean terms. This means that you get quite a few paragraphs containing interesting and vital information that comes out as pure guibberish. The section that annoyed me at that time of writing was in the Yedo chapter where he translates:

Now reading this you get four strategic fighting methods and four words that you have no idea what it is supposed to be. Had he included the hanja and or hangul you might be able to use this to research into the matter and come up with something, but since there are only latin alphabet and he does not transcribe into it following a strict transcription system you really can just guess at that he means. Even if you speak Korean this makes the job impossible and it would really be so much better if he or the publisher could just include the terms in the Hanja at least. Hanja is traditional characters of Chinese origin by the way.

Damian an online friend I have had the pleasure of writing with over many years did make a valid and interesting point on this though; even if the hangul and Hanja were included, you still had to contend with the fact that language change over time, words can change meaning and I remember reading in the Muyedobotongji that this happened even back then. Muyedobotongji was published in 1790 which is quite a while ago   (232 years ago at the time of writing this), but the book did not show up out of thin air. It make heavy references from older books, the Yedo chapter for instance comes largely from Mubiji /Wu Bei Zhi) and that book is from 1621 which is 401 years ago today, but it is a timegap of almost 200 years (169 years to be exact) between the Mubiji and Muyedobotongji. This means that words and documentation that the Muyedobotongji authors were using had changed over time themselves. Look at the words for "sword" for instance. There are two commonly used words in the Muyedobotongji, Geom (검) and Do (도). Now originally they were used in connection to what kind of sword they were talking about, but at the time of writing the Muyedobotongji it was simply any kind of sword. Heres a quote from the authors of the Muyedobotongji taken from Sang H. Kim's translation:

They continue with another quote which I really liked:

"Suk Myung said, "Gum means to grab. Therefore the sword that one grabs for defense does not necessarily have blades on both sides." 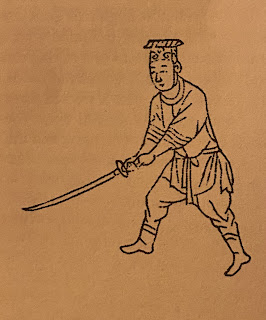 In fact Gum/Geom is the same word as in Keumna better known in the west as Quinna the art of grabbing which is an important part of Chinese martial arts at least. The word is also the same as in Korean "Gumdo" (검도) which is how the Koreans read the Japanese term "Kendo" or the way of the sword.

Going back to the opening paragraph for those wondering and who have not read my earlier articles on Yedo 24 Se the four strategic methods are (translations from Jack Chen):

Insert these words into the earlier quote and you'll have a short hand overview of what the korean sword system is all about instead of some letters arranged into what seems to be korean of some sort :-)