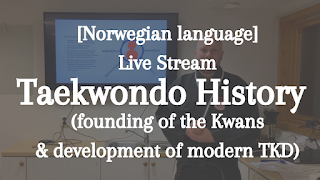 Here in Norwegian language I pick up from last time starting with the founding of the different major Kwan (schools) in the 1940s and 50s and then go on to tak about the development of modern Taekwondo, the Korean Tang Soo Do, Taekwondo, Tae Soo Do and back to Taekwondo  Association, it’s counterpart The Korean Soo Bahk Do Association, the development of Korean forms Hyung, Tul, Poomsae, the development of modern competition sparring and kicking techniques and then I show examples of stuff we train today in our syllabus in traditional Taekwondo Union from older Korean martial arts manuals and Karate manuals.

I am thinking of doing this again it in English as there has been some interest in this material :-)