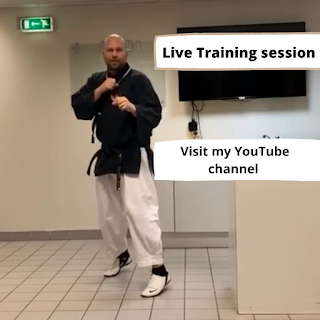 I just published my second live training session on YouTube:-) This time I did:

- Kicking (front, round, side)

It’s in Norwegian language but it will be easy to follow along for anyone regardless of language :-) it is live so there is no editing or anything. It is therefore complete with water breaks etc. Just plug and play :-)

Or see it here

A long time ago (so long I don’t really remember if we were discussing history or what, Øyvind sent me a draft of an article he has started writing about the hwarang. It was easily one of the best pieces of writing I’ve ever read on them, so when he asked me if I remembered the draft he sent me and if I was willing to post his finished article I was overjoyed, humbled and homered all at once :-) I’ve been called a Taekwondo nerd many times, a badge I wear with honour, but Øyvind as you will see operates on a whole new level of greatness :-D This I am sure will be a great read for you, and unlike some people Øyvind has used good sources and critical thinking in his research. Thank you Øyvind :-)

The flower boys of old

If you have been involved with taekwondo for any period of time, you will undoubtably have been told that once upon a time, there were these mighty warriors in ancient Korea called "hwarang". They are usually mentioned in the curriculum when trying to explain the ancient roots of the martial art, right after the cave paintings of Goguryeo (37BC-668AD) but before the unification of Silla (668AD) and the Goryeo-Khitan wars (perhaps more correctly explained as a series of unsuccessful attempts of invasion, spanning roughly from 993-1019AD). In the ITF Chang Hon syllabus there's even a hwarang tul (tul being the ITF suffix for their forms, comparable to poomsae in WT style taekwondo), complete with the following description: "It is named after the hwarang group of scholar-warriors that originated in the Silla Dynasty in the early 7th Century." (Taekwondo Wiki).

The hwarang ideal has become a popular symbol in modern Korea. It has been used in the name of the Army Officers Training School, as the name of a high-ranking military decoration, as the name of multiple bars (one of which was frequented quite often during the author's stay in Seoul in 2010-11 due to its 3-hours-long "happy hour"), and generally brings about a sort of national pride mixed with romantic ideals of earlier days, much the same way as Shaolin monks are revered in China. However, this way of thinking about the hwarang is relatively new. It is an idea that has grown parallel to Korean independence after the war, and as far as I have been able to work out, the source of this idea might have been Yi Son-gun (李瑄根), who in 1949 published "a study of hwarang-do" (花郞道研究, hwarangdo yon'gu), which reads like a, frankly, speculative essay on hwarang ethics and ideals, and how these ideals influenced the entire Korean populace in the centuries after.

So, today I'd like to dig into these scholar-warriors and try to separate facts from fiction.

All translations are my own unless explicitly noted.

My first ever Live training session 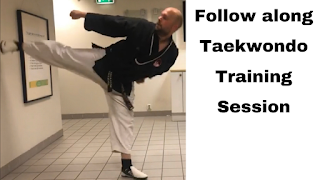 This is my first ever live practise session. As of November2020 there is no regular Dojang practise allowed in my town because of COVID-19. So to motivate myself, and to perhaps give some motivation and structure to others training I went on my Dojang’s Facebook group and did a live training session.

Its all in Norwegian language but it should be very easy to follow along the session if you know the Taekwondo terms. 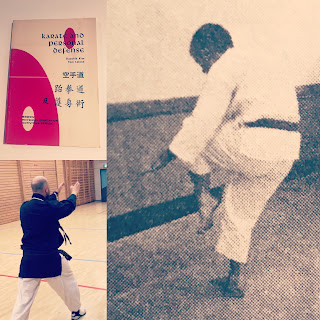 In part 1 I wrote a general overview on the history of the form, who developed it, the different main
versions out there, and then I promised that in this part I would look at the performance of the form itself. I have selected the Kim Daeshik version to be the first one, as this is the oldest published version out there.

The book "Karate and personal self defense" written by Kim Daeshik and Tom Leland back in 1971. If you remember the form was developed between 1965-1967 before it was replaced in 1972, so while the book is very close to the making of the form, there is a little gap between the introduction of the form and the publication of the book. As for Kim Daeshik himself, I think he is one of the best kept secrets of "Kukki-Taekwondo". He is no longer with us, and I am very sad that his work did not get more widespread recognition because he did write some awesome material during his career. The book this form is from is not one of them though, but it does contain a few gems like the original Koryo. I will try to write more about Kim Daeshik in the future and give a few book recommendations, because seriously some of his works are must reads. This post also lets me introduce my own teacher; Master Erling Oppedal. I sometimes get negative feedback on this blog since I am "rocking the boat" so I have purposefully kept him a little anonymous on this blog, but I asked him if he could pose for the illustrations for this post and I was so happy when he said yes :-D

So with those introductions out of the way let us jump into the form itself :-)

Recently our Dojang made a bunch of reference videos to help home practise. I was in charge of editing the videos, so after making those I repurposed footage of me into a “train along” video :-) My teacher does all the traditional commands, he counts and I do the techniques. So if you do a quick 10-15 minute warm up, press play and follow me, then do some stretching and or strength after the video and you’ve done a great traditional Taekwondo training :-)

I do hand techniques, foot techniques and forms in this clip. If the video is well received I’ll try to get going on some dedicated home training videos👍🏻

On another note, I’m nearly finished with the first post on “original koryo” performance, the Kim Daeshik version so stay tuned for that in the near future :-)

The Original Koryo Hyung Part 1; an overview (Will the real Koryo please stand up???) 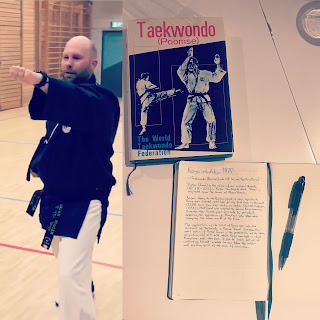 This will be the first post of a small series, focusing on the history, development and performance of the original Koryo form. I will refer to this as "Koryo Hyung" for the remainder of this series to not confuse readers with the normal, mainstream, "new" Koryo Poomsae which most practise today. So when I write "Koryo Hyung" that is the old one, and Koryo Poomsae is the current one.

As a Taekwondo Nerd I have always read a lot of Taekwondo history, and one thing caught my interest many many years ago was a reference that looked almost the same in all articles and books on modern Taekwondo history. Especially if the book or article touched upon the development of the Korean Taekwondo Association forms (the Poomsae we practise today). It was something along these lines: "Around 1965-67 a committee consisting of representatives from most major Kwan (schools) developed the Palgwae and Judanja (Black belt) Poomsae. In 1967-1972 the same committee with the addition of representatives from Ji Do Kwan and Mu Duk Kwan developed a new series of forms. In 1972 the Palgwae and Koryo were replaced by the new forms, the Taegeuk series and a new Koryo form." This or a close variation of this quote appeared everywhere and it bugged me to no end. You see the Palgwae were replaced but they did live on. I could find videos, books, articles, webpages with detailed descriptions of them with no problem. A few of the books in my Martial Arts library were bought precisely because of my interest in what these forms were like. Not so with the original Koryo.

I found this such great news I had to share it here :-) Very recently the Kukkiwon made a playlist on YouTube public with very well made Poomsae tutorials. I have only watched through Taegeuk il jang but it was so well made that I want to share the whole playlist here :-)

The link above will hopefully take you directly to the playlist :-) Let me know if it doesn’t work. It focuses strictly on solo performance :-)