First of all the headline is a joke, but I have seen the same break performed under (insert martial art style here)`s death touch/ strike. I will explain what happens below the clip but first watch the clip:

What I did was that I drank a bottle of beer (no beer was hurt in this clip) and nearly filled the bottle with water. I then gripped the bottle tightly with my left hand and used "Batangson Naryeo Chigi" or a strike with my opened hand on the opening of the bottle. When done with sufficient strength you actually push the air inside the bottle downwards usually resulting in the bottom of the bottle to fall cleanly off (this time almost the whole bottle broke instead). Kids do not try this at home:-)

Martial applications or relevance? Almost zero. It only demonstrates that the "breaker" (me) has strong gripping strength and that he can focus a lot of power on a small surface resulting in the break. My guess is that any traditional trained Taekwondoin blue belt and above should be able to replicate this with no problems at all. Even untrained adults should be able to do this as long as they can strike hard with their opened palm and possess enough gripping strength.

This is the 4th post in a series focusing on how one technique (in this case an Eulgeul Makki or Face/High Block) can have very different Applications and this needs to be adressed when looking at Our forms for combative meaning. The technique itself has many Applications, but the Eungyoung (practical Application) of Poomsae will depend on how you do Your "Boonhae" (breaking Down of forms into smaller pieces). You will have to consider the technique before or after the high Block and pick the Application that fitts the best within the form. The forms role as an mnemonic for self defense function in that it shows techniques or movements within a dynamic context vs drilling of basic techniques (Gibon Dongjak) which focuses on the single technique or movement that focuses on static context. You could therefore say that this series focuses on static context or Gibon Dongjak and not Poomsae Application since that would have to consider the form (techniques before or after or both) and pick one of these (or others) Application that fits within that context.

In Part 1 we focused on the main movement as "Block" both against haymakers and straight punches to the head. In Part 2 we focused on the movement from a closer range against a wrist grab. In Part 3 we looked at it as a "lifting up" grappling move (upward tension on the Lock so the opponents gets up on their toes to help With the pain). In this part I want to focus on both the primary movement (blocking hand) and the secondary movement (Non blocking hand) and how they together can work defensivly for the Taekwondoin.

"Compliments aren't for the ego,
they are for fueling the fire
to make yourself train harder,
push further and to
make sure that you are better next time."
-Damian Adams
﻿
Lagt inn av Ørjan Nilsen No comments:

This series was started to demonstrate that one singular technique (in this case Eulgeul Makki or Face/High section Block) can have multiple Applications. In Poomsae you will have to pick the one Application that fits in With the technique before or (and?) after the one you are looking at to find its combative meaning within the form. The reason why I started the series was to show that eventhough the basic movements that we have inherited from Taekwondo`s mother arts are "jumbled" around in Poomsae, we can still find practical Applications within them. Personally I think that the originators of Poomsae knew far more than we give them credit for and I find it likely that they designed poomsae With practical Applications in mind whilse still grading them for difficulty of performance etc. In Part 1 we looked at the movement of the "blocking hand" as a Block against straight and round punches to the head. We also looked at the movement as a part of a simultanious defensive/offensive move in one as recorded in several Places in Our Poomsae. In Part 2 we looked at it as a wrist grab release showing allready that the single technique could handle 3 different attacks!

If you see the whole clip and especially the last 30 seconds or so you will discover the legendary north korean method of breaking like they do in their incredibly awsome demonstrations. Of course they are cheating instead of showing how true Taekwondo can be used for breaking so I have just lost all respect for the north Korean demonstration team....

I have written about breaking before and its role in Taekwondo and I still say that I am more impressed by those who do it less flashy but with proper technique and hard breaking materials than this flashy cheating stuff.. 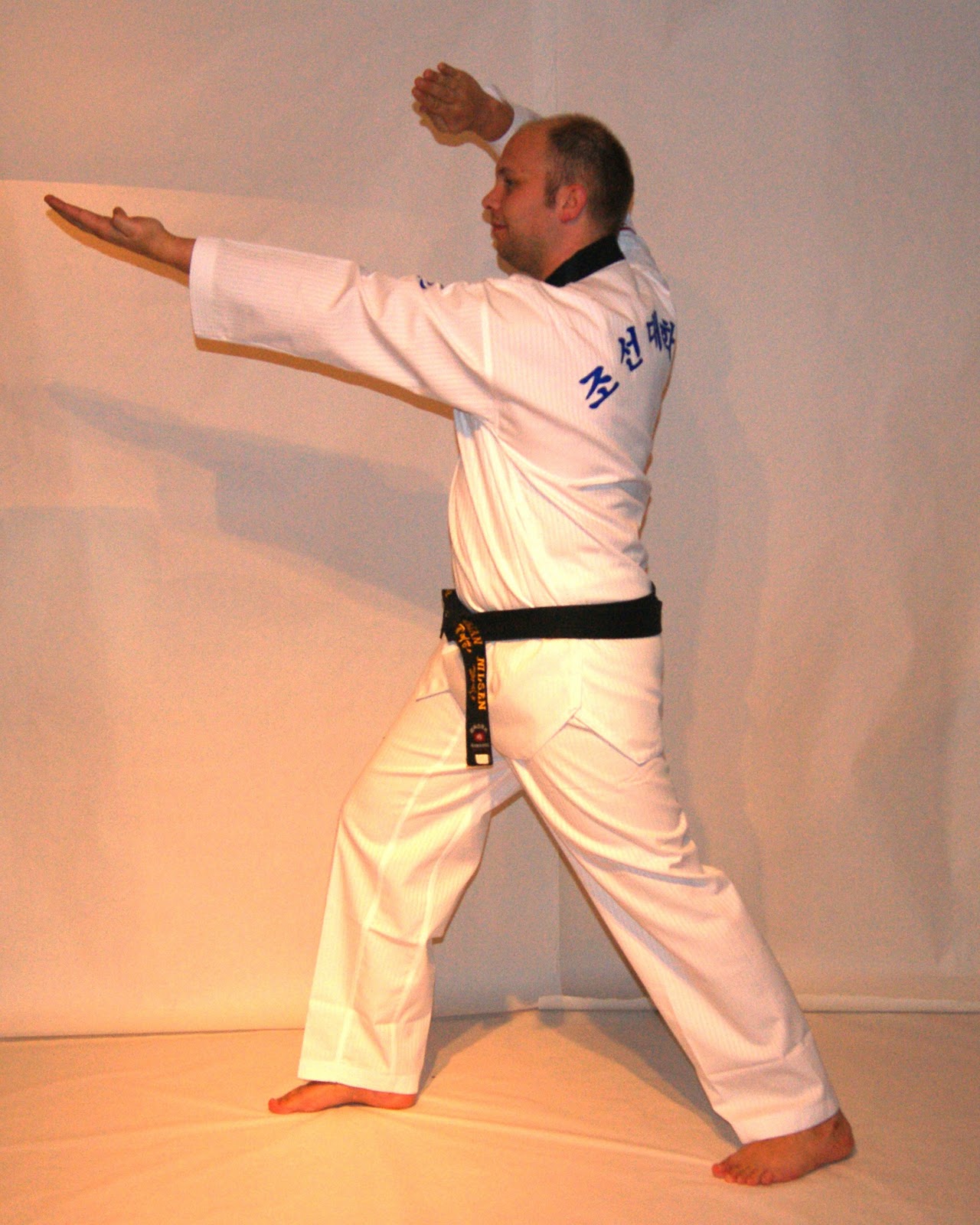 Following my last post on Eugeul Makki or high section block, I pick up from where we left off (applying it as a defensive "block") and change it up a little. The point of this series is to demonstrate how common Taekwondo basic techniques like for instance the High section block can have multiple application depending on what situation you find yourself in. In Part 1 where we focused on the
"block" and the primary movement of the technique we touched on different ways of using it both as a purely defensive static "block", as a deflection and as a part of simultainious defense/ offense. Also the attack ranged from straigh head punches to wild haymakers, so allready in Part 1 of the series you can appreciate how important and varied technique it is. Now for Part 2: