This is the 4th part of a journey of disovery. Often when you try to discover and uncover the combative meaning of a Poomsae/Hyung/Tul/Kata/Form you jump from technique to technique or sequence to sequence. This is not possible when I have started doing this series the way I started. I explore one part of the form after another just as they appear when we perform Keumgang Poomsae. Before I started this series I wanted to just give some of my favorite applications to a few of the techniques/Sequences but then I decided I should challenge myself into comming up with applications for each and every move, and not only that, I should also come up with different applications to the moves that appear several times in the form.
This time I am going to continue where I left of: The next move in Keumgang Poomsae that is not yet explored from a combative viewpoint is the "large hinge" or "kheun doltzeogi ". 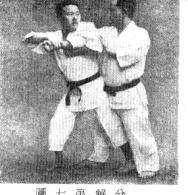 I had this discussion the other day on the internet with a "TKD Master Instructor". He basicly believed that everything in the mainstream texts when it comes to applications are the one and only. All the Poomsae are designed to fight multiple opponents and each time you turn you turn to face a new opponent. I said that yes this is one way to look at it, but for me the opponent is situated in front of me and the turns are to tell me where I should postition myself, to get body weight into grappling techniques, to learn how to develop hip twist as power generation etc. He then quickly pointed out the classic double blocks that are "obviously" designed to block two opponents attacks at the same time. I gave him some realistic applications against a single opponent instead. In the end he said that he would continue with the way he learned allthough I had "clever arguments":-)

This is the third part of a series where I look closer on Keumgang Poomsae to see if the motions the form contains hold more practical applications than the ones normally taught at mainstream Taekwondo Dojang`s. In the first post we looked at the opening movement followed by three openhanded strikes.

The second part followed with the next three movements (inward knife hand blocks performed in back stance). In this post I will look closer to the most signature movement of Keumgang Poomsae. Namely "Keumgang Makki" (double block with one high section and one low section block performed at the same time) done in "Hakdari Seogi" (one legged stance also known as "crane stance").

In todays post I want to continue where I left off on my previous post. In Part One I started sharing some applications to Keumgang Poomsae that are a lot more combative valuable than the standard kick, block punch intrepretations are. Click here to read Part One. In the first part we looked at the opening moves (first wedge block, and then three openhanded strikes to the chin in a row, all performed in long front stance (apkoobi seogi). This time I wanted to continue by looking at the next three techniques.

Keumgang Poomsae has always been one of my favorite Poomsae in our system of Taekwondo. Even a long time before I was actually taught to perform it I loved to watch it during belt promotion tests, competitions and demonstrations. It is a very unique form in our system as it contains a lot of "Dan Jun Breathing" (deep abdominal breathing excercises used to develop "Ki") and that it does not contain a single kick. The absense of kicks makes it truly unique in that it is a form practised in a martial style often thought of as a kicking art.

One step Sparring. To step or not to step.

There was an interesting thread on martialtalk.com in the Taekwondo forum with this headline. The starter of the thread asked how people go about with one step sparring. (Version A): In his Dojang they stand in jumbi (ready) seogi (stance) , and with no kihap (yelll) the attacker moves forward attacking the defender with a high section punch. He goes on to say that the punch would be so close that it would conect had not the defender defended himself.
He has now changed Dojang to Germany and here they are doing it the way I was taught (Version B); The attacker and defender stand both in Jumbi Seogi (ready stance). Then the attacker steps his right leg back into ap koobi seogi (long front stance) and low block and "kihap" (yells). The defender kihap (yell) back, and on this signal the attacker moves his right leg forward into long front stance, right high section punch.

He then goes on to ask: What is the mainstream way of doing this, and what does the newest edition Kukkiwon Textbook say on the subject?

Email ThisBlogThis!Share to TwitterShare to FacebookShare to Pinterest
Etiketter: Kyorugi, Other

No first attack in Taekwondo?

When reading about Poomsae or traditional Taekwondo in general one often finds statements like: "Every Poomsae (form) starts with a defensive technique to symbolise that the Taekwondoin will never throw the first strike." Another common statement regarding the philosophy of Taekwondo is "There is no first strike in Taekwondo". The last one is obviously "borrowed" from Karate our sister martial art. They have a maxim wich goes "Karate Ni Sente Nashi". This is often translated as "There is no first strike in Karate", a more correct translation of the term would be however: "There is no first initiative in Karate" or in other words a Karate person would not intentionally start a fight.