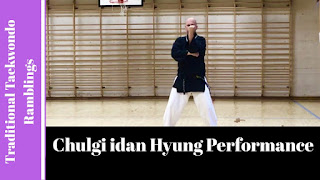 Following up from my last blog post here is a clip of me performing another hybrid or personal version of Chulgi 2. These series of forms (there are 3 in the complete set) is in my view remarkable in that they most possibly represent three generations of great masters thoughts and ideas. The reason I say that is that lineages in Karate that goes back to "Tode" Sakugawa but does not go through "Bushi" Matsumura and Anko Itosu practise only the first in the series. This means that most likely Sakugawa invented or imported the form that was to become the first in the series. Again if we look to Karate lineages going through "Bushi" Matsumura (a student of Sakugawa), but not through Itosu, we see that these lineages usually practise the first two forms but not the last in the series, supporting a claim that the second form was invented as a commentary by Matsumura. The third form is practised by lineages going through both Sakugawa -> Matsumura -> Itosu making it likely that Itosu made the last one. So three forms containing the knowledge of three legendary masters and fighters. Some might it find it interesting that Othsuka, the founder of Wado-Ryu Karate who was a student of Gichin Funakoshi and Choki Motobu decided that the first form in the series was one of his absolute favorites, while the second and third one was dropped because in his view they were next to useless i I remember his words correctly. This explains why Wado-Ryu Karate only practise the first one, eventhough they come from an Itosu lineage.