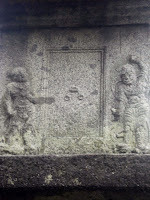 Introduction: I put a lot of emphasis on both my writings, research and energy (not to say money as
well) into learning and understanding Taekwondo and martial arts history. Often I am asked why I bother with it, as there is perceived to be very little to gain from this, and it can be quite time consuming. Also I have heard (and will undoubtfully hear it more in the future) that understanding and learning history will not make someones side kick any better. It is true that history will not make you perform physically better, but in my opinion it is one of the areas that are grossly overlooked and despite what people believe and perceive, I personally have gained a lot from this research. In the hopes to motivate others into delving a little more into history I will write a few points on what this is in this post. 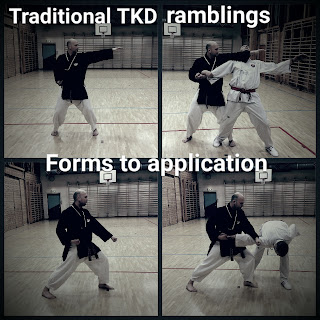 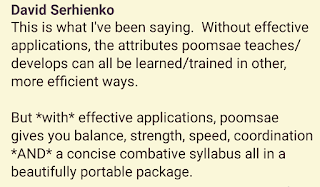 I hope to provide much more video content to this blog in the future. I have therefore set up a GoFundMe page on www.gofundme.com/traditionaltaekwondoramblings which I hope I can crowdfund a video editing software so I can make good quality videos for the blogs readers. If you want to contribute please visit the link to my GoFundMe page. Every donation helps :-)

The interconnectedness of Poomsae 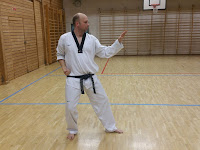 In the old days it was normal even for a master of the martial arts to know as few as 1-5 forms, but
these forms were studied in great depth. Today we have a situation where we have an abundance of forms, which promotes a wide but shallow study of them, but as Funakoshi writes and I am paraphrasing heavily here; the forms are just variations on a theme. This means that if you know one or a few form(s) indepth, you will come to understand another form much more easily than someone who does not have a clue. The forms are made for self defense, and this is even confirmed for the Taekwondo forms of the KTA (also recognized by the Kukkiwon and WTF) by Lee Kyu Hyun in his 2010 book "What is Taekwondo Poomsae?". This means that the "problem" or "theme" that the forms are a variation of is the same for Karate, Taekwondo and many Chinese systems as well, the theme being self defense, or the countering of physical violence.