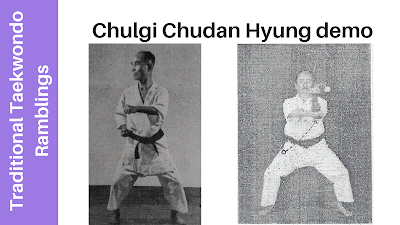 I have been practising Chulgi Chudan Hyung for a few years now, and it is still giving me all kinds of ideas and lessons in mechanics. The other day the schools opened up after a looooong summer and we could finally start up formal training again, and so I met up early to do some self training and I also used the oppertunity to shoot a little video of myself performing Chulgi, Taegeuk il jang and taegeuk i jang. Taegeuk Il jang I shot from different angles etc, and I intend to make a video where the performance is done, interjected with clips of applications. For this post however I am sharing what I can only call a hybrid or personal version of Chulgi Chudan Hyung. 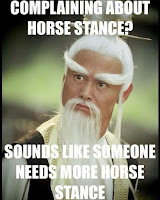 traditional version of it, coloured by my teachers experiences). This post however will perhaps be an interesting read for any Korean Martial Arts practisioner as we all use horse stance no matter if you practise Taekwondo, Taekwon-Do, Tae Kwon Do (WTF/Kukki, Chang Hon/ITF or independent), Tang Su Do, Su Bahk Do, Gumdo, Gyungdang etc. It is one of those universal stances that seemingly every martial art makes heavy use of. In Norway we have a saying that goes "A loved child has many names" (Kjært barn har mange navn), and while the translation of the various Korean name for this stance is remarkably consistent as "Horse Stance" there are a number of different Korean terms used to refer to this stance. One exception that has a unique English name for the stance is ITF Taekwon-Do which translate their Korean term into "Sitting Stance". In this post I will look into several different Korean terms for the stance, re-translate them into English and give a little background. Some people complain that Korean masters all seem to have their own Korean term for this stance but I think that within the different organisations in the main we see that the Korean terms are used consistent. It is when we look at different martial arts or organisations we see different Korean terms being used for what is essentually the same stance.