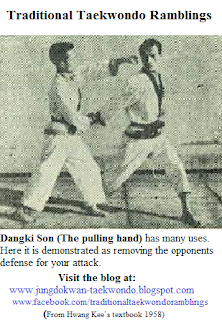 In my recent post "Taekwondo is not and has never been a "kick block punch" system!" I referenced
a lot of Taekwondo books to demonstrate how Taekwondo has emplyed more tactics than just blocks, punches and kicks since the Kwan era. The oldest book was written by Hwang Kee in 1958 with the title "Tangsoodo textbook". In one of the comments I was asked why this book was referenced in Taekwondo history when Hwang Kee never truly joined the Taekwondo movement and developed his art into Soo Bahk Do. This post is not only a result of that comment though. This and similar questions on why I choose to count Moo Duk Kwan and Hwang Kee into Taekwondo history has been asked many times in discussions both in person, on online forums, e-mail and on this blog. I am sure I am going to need to explain this again in the future, but I hope this post will contribute a good answer to those who have wondered but yet to do the asking:-)

Taekwondo is not and has never been a "kick block punch" system! 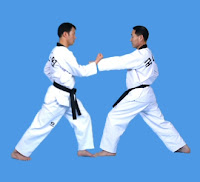 I my last post I shared applications for the first 6 movements (move 3-4 were omitted as they were a mirror image of move 1-2). I have laid out some of the reason for why I love Taegeuk Il Jang in a previous post so I thought that I should dive right in on apps. I mentioned and tried to describe how move 5-6 can be used as a counter armbar for cross side wrist grab (he grabs your right wrist with his right hand for instance). I am not sure if I made it completly clear so I will start by revisiting move 5-6 and present that app again but this time I hope to be a little clearer:-)

As promised in my recent "love letter" to Taegeuk Il Jang where I laid out some of the reasons why I love that form I promised applications to the form. I have many apps to every movement within it and they fit the form to various degrees (i.e. some stray somewhat from the basic techniques but they are
still close enough in my own opinion). The challenge for me is which to include and which not to include. I decided that I will share applications for each and every movement from beginning to finish so that anyone wanting to teach apps for Taegeuk Il Jang will have a (hopefully) good starting point to use or at least be inspired from, and then I can revisit the form from time to time in the future to share alternative or other apps that I will not share in this run through. This way we get through the form from start to finish in one series of blog posts instead of working on it for 3 years running ;-) So where do we start and what level will we be aspriring to? I hope this post will benifit as many people as possible so I will include the more common apps along with the more "including" ones. Including as in using more of the basic movement than just the "obvious" movement.