3 kicking drills that will improve your kicks

Here are 3 kicking drills that I am sure you will find both fun and challinging. They will also help to improve Balance, targeting, stringing kicks together and body Control. So without much further ado here they are:-) It has absolutly nothing to do With forms Applications or self defense but it is very Challenging (is that a Word?) and fun. The high kicks have been a part of Taekwondo since the 50s and are a Direct Korean influence. They are not good for self defense (at least not in the incarnation being drilled here) but they work extremly well in competition and friendly sparring:-) Doing them will also make Your legs stronger, and will make it easier to master the kicks to low targets as well:-)

Bunkai is getting huge in the Karate circles around the globe. What started as a minor trend has now grown into a huge industry. For those who do not know "Bunkai" is a Japanese term wich is often 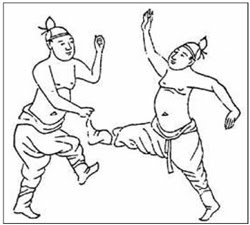 used for interpreting Your forms (Kata) for combative meaning. It is hard to pinpoint excactly when this trend started, I became aware about it in the early 2000s but I have read books about the subjects that date back to the early 90s. Many People today are saying that this has always been done and others who complain that this is a New fad says it was not done untill the rise of MMA popularity.