Taekwondo is concerned with unarmed 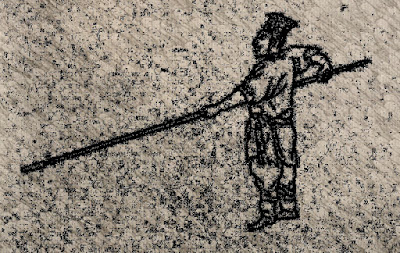 conflict for the most part, allthough it would be a lie to say that it did not have defenses against weapons too in its syllabus. It does not matter wether you look into the Kukkiwon Textbook or the Encyclopedias of Choi Hong Hi on this matter, and most of the early books on Taekwondo included some defenses against weapons. Many will probably be suprised when I say that in the Kukkiwon Textbook there are examples of defenses against long stick, club, knife, pistol, bayonet and the sword. Many will indeed be suprised, as these are not widely practised anymore, but others will still be taught defenses against all or some of them even today. My take on this is that to be able to defend against weapons you need to familiarize yourself with them, so I find it likely that the older practisioners of Taekwondo had some basic training with all of these weapons. That being said, weapons forms, and more systematizised weapons study has not typically been seen in Taekwondo Dojang. Sure there are those who wants to charge more money form their students and include some XMA inspired "weapons programs" (note the "-signs in "weapons"), and there are those who are even more "ingenious" when it comes to including weapons training. One Korean master I came across had developed a revolutionary weapons program with the sword where you would essentually be doing the Taegeuk series with a sword instead of the normal hand techniques. And Amarican master I came across tried to sell the idea of an ancient sword form that he had discovered in a Korean temple which turned out to be Taegeuk Il Jang with a sword. Except for Master Kim Bok Man I do not know of any Taekwondo masters who teach weapons as a genuine part of their art. This goes to show that Taekwondo is essentually a weaponless system.