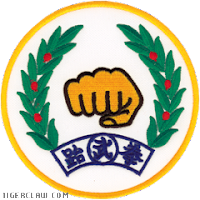 Hi. Just had to share this on the blog. I went "youtubing" and found a whooping 39 minutes long clip of vintage video footage of Moo Duk Kwan filmed in the late 50s or early 60s in Korea. The clip is the longest and most comprehensible video footage I have ever seen of early "Taekwondo". It contains a lot of forms, impressive breaking demonstrations, sparring, self protection, etc etc..

This drawing stuff is just plain old fun. It has been years and years since I bothered drawing stuff, but now I have been drawing like a true artist should:p

Taegeuk Il (1) Jang or the whole Taegeuk series of forms for that matter is  often viewed as void of practical applications. In this post I have provided one of my applications for the very first move of Taegeuk Il Jang; The low block in the short walking stance (look at opening picture). I see this move as a versitale movement that can be used for a great number of things but I have only provided one of those applications in this post.

I was sitting around with nothing to do so I started "drawing" on a piece of paper. The result was a great work of art wich contained one of my main applications for the double block (low and high) from Taegeuk Pal Jang. This move is frequently interpreted as a block against two opponents attacking your head from behind and a kick from the front, and the defender blocking both attacks (eventhough he does not even see his attacker from the rear).

What is "Bunkai" in Korean?

Since I have some basic knowledge of the Korean language, I practise Taekwondo and research my forms I somewhat "often" encounter the question in the headline; "What is Bunkai in Korean?" You see untill recently there were virtually no Korean martial arts exponents who researched their forms to extract viable self defense techniques, while in Japanese or Chinese martial arts there is a long standing culture of extracting self defense techniques from their forms.

Korean Martial artists who wants to research their forms for more sophisticated combative applications beyond the basic kick, block punch explonations therefore often have to see toward other martial arts and how they go about researching their forms.

Likewise Korean terminology on the subject is not standarised, and often non existant. Many Korean Martial Arts exponents therefore borrow Japanese terminology to use in this field or even worse make up pseudo terms sounding like Korean (Bungai anyone?). This post is not going to be about how to research your forms, but it will be my contribution to give those who wants a Korean terminology when it comes to research your forms.

Taegeuk Poomsae; Why does "Everybody" Hate Them?

I find Taekwondo history very facinating. I think most of my blogposts has a history element in it to a lesser or larger degree. Our forms history is likewise also very facinating with the evolution going from the "borrowed" forms under the term "Hyung" (pronounced Kata in Japanese) from Chinese, Japanese/Okinawan sources, to the Korean masters own creations like the Kuk-Mu forms and Chang Hon forms, the latter still being used in the different ITF`s and Dojang from a Chang Hon Ryu lineage (Ryu is often used in Japanese martial arts but it can also be used in KMA as they do have "Ryu" in Korean as well. Translated directly it means "Flow" but usually translated into lineage, school or style). A little later what was to become Koreas Taekwondo Association started developing their own forms. First they produced Palgwe and Judanja/Kodanja Poomse and later in 1972 they came up with Taegeuk and a new Koryo Poomsae wich replaced the earlier Palgwe and original Koryo Poomse.

This is the third part of a long rant (so long I divided it up in three parts) about Taekwondo`s largely forgotten aspect of Ho Sin Sul (usually translated into English as Self defense). It seems that the majority of Dojang all over the world today practise and focus on basics, forms and competition sparring. This leaves out both breaking (allthough that aspect is usually dusted off at most demonstrations) and the before mentioned Ho Sin Sul. I went "youtubing" and found three clips entitled "Taekwondo practical skills 1-3". It was a bit reassuring to see that "old fashion" Taekwondo Ho Sin Sul still lives on in this world where most "Ho Sin Sul" demonstrations are "Movie Ho Sin Sul" or "Circus Taekwondo" as one of my seniors so diplomaticly put it.

There Is Still Hope For Taekwondo "Ho Sin Sul":-)

I was almost moody the other day thinking about how Taekwondo is now seen as a childrens martial sport
with no emphasis on "martial" and big emphasis on "sport". I am 27 years old and in Olympic Taekwondo terms that is old. Ancient even.. You see most competitors in an Olympic Taekwondo setting is pretty much finished around 25 years old. Yes there are a few that can keep going to the ripe old age of 28-29 but you will not see many in their 30s competing in Olympic sparring at a high level. Taekwondo today is a "fun" martial activity with plenty opertunities for competition. Great for kids but grown ups practise grown ups martial arts like Karate, Muy Thai, JuJitsu, MMA, etc.

For those who does not come from a KMA background: Ho Sin Sul is loosely translated as "Self Defense" in English and refers to one of the "Pillars of Taekwondo" training. Today this part is almost lost in mainstream Dojang all over the world with the focus being on Sport Taekwondo (both Poomsae performance and Olympic Sparring). Sometimes it feels like this part has "died" in Taekwondo. I recently watched a promo video for the Kukkiwon that presented Taekwondo as a martial sport consisting of basics, poomsae and sparring (breaking and self defense was not mentioned in the video).

The few who does practise and include Ho Sin Sul does so often by incorporating outside influences (particulary from Hapkido it seems) and making it up they go. Cross training and incorporating techniques from outside sources are in my view a good thing, BUT grabbing techniques from outside sources just to have them in the system is not necesarily a good thing. You must consider the overall strategy of the art and pick techniques that enhances that strategy. If not then you get a "mish mashed Martial art" with plenty of techniques but no way to apply it.