I have written before about Taegeuk Oh Jang, including one post where I dealt with the opening movements, and another post detailing the side kicks and elbow strikes. I will write about elbows in this article as well, but I will focus on
the round elbow strikes that follows from the single knife hand block, instead of the side kick, targeted elbow strike combination I have written about before. If you read this article and the other two I've mentioned, you will have unlocked about half of the form :-) I might do a indepth article in the future where I take Oh Jang apart move by move just as I did with Taegeuk Il Jang, but for the time being you get a piece meal (but hey it is free:-)  ) 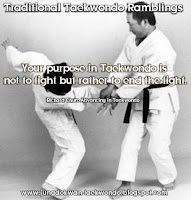 The Taekwondo world lost one of its bright lights at the end of the last year when Richard Chun
passed away. I never trained with him, never spoke nor discussed online with him, yet he has influenced my Taekwondo through his books. I first got his "Advancing in Taekwondo" book on Kindle a few years ago, read it from cover to cover (so to speak) and I was amazed that Richard Chun wrote from the perspecive of Taekwondo as a traditional holistic martial art, and how close his views were aligned to my own teachers words and teachings. As regular readers will know my own teacher comes from a Ji Do Kwan lineage, while Richard Chun comes from a Mu Duk Kwan lineage. While they might originally hail from different schools, traditional Taekwondo as a martial art seems to be suprisingly consistent accross the different Kwan as I see no contradictions between these two men. I loved the "Advancing in Taekwondo" so much and many practisioners I highly respect had allready recommended his older book "Tae Kwon Do, The Korean Martial Art" from 1976 that I had to get it. That book is in my own opinion an even better look at Taekwondo than the modern Kukkiwon Textbook when it comes to getting to understand the theory behind the martial art. The Kukkiwon Textbook is almost a sporting book in comparison, and where the Kukkiwon Textbook fails to deliver any Ho Sin Sul (Self defense) Richard Chun delivers on everything from Break Falling, throws, sweeps, release techniques and even some ground fighting (self defense when you are on the ground).

When I read that he had passed away I thought that I should try to honor him in some way, so I read through his books, picked out some quotes that has jumped out on me and posted some pictures with the quotes on the facebook page of this blog. In this post I thought I could share these quotes again, but with a little commentary on each. Before we begin however I would like to give my condolences to his students and family.

2017 in retrospect and where do we go from here

Every January I write a post while sitting down, looking through the blog-year and gathering a few thoughts on the year to come. It`s become a real new year tradition for me, and it is one that I look forward to when the end of the year gets near. 2017 has been perhaps the busiest year that I can remember on all fronts. As a result a hobby based thing like this blog has been put on the backburner.

It is easy to post something short and interesting on the facebook fan page of the blog so I have been providing content, but it has not been a very productive year when it comes to writing articles for the blog itself. The recent loss of net neutrality in the US might also affect this blog negatively as well in the future, but I have not seen anything that threatens it in the imidiate future yet, so fingers crossed that I can keep blogging for free, because once I have to pay to do it I will either have to charge people for its content or quit blogging altogether (and I am leaning toward the latter actually if it comes to that). So here comes the anual lists and overview: