I my last post I shared applications for the first 6 movements (move 3-4 were omitted as they were a mirror image of move 1-2). I have laid out some of the reason for why I love Taegeuk Il Jang in a previous post so I thought that I should dive right in on apps. I mentioned and tried to describe how move 5-6 can be used as a counter armbar for cross side wrist grab (he grabs your right wrist with his right hand for instance). I am not sure if I made it completly clear so I will start by revisiting move 5-6 and present that app again but this time I hope to be a little clearer:-)

Move 1-2 can be used against a same side wrist grab (i.e. he grabs your right hand with his left hand). Move 5-6 can be a logical follow up to finish move 1-2 but it can also be used against a cross side wrist grab (i.e. he grabs your right wrist with his right hand). So in the first form of Taekwondo in the first 6 counts you have a solution to two different "problems" you could face in any fight or self defense situation, as well as a joint lock. Well the app against a cross side grab is this:

You then execute the low block to lock his arm and position him so he is open for a  finishing strike.

You then grab his shoulder to keep a tactile sense of his movments and punch with your other hand.

Below is a photo series depicting the same app from a different angle:

First up the Ji Do Kwan chamber

Then the Kukkiwon chamber

The block itself is a little different too. The same trajectory is used but the Ji Do Kwan one ends up with the fist at philtrum height (just below the nose) while Kukkiwon has it at shoulder height.

In application I have chosen to lift the chamber a little as well as the end position but the movement is the same throughout.

(Sorry but no photos here. I forgot to take them in my hurry. I will try to take a few next week :-/ )

Block same side as the attack, Works well for straight attacks if hands are up and With no or little Chamber.

Ji do Kwan Chamber, against a haymaker, hook or round punch toward head

Someone has been verbally assaulting me, I have tried everything to deescalate, I can not flee and violence is imident. I use Geoff Thomspon`s "The fence" to keep control and distance. I have a narrow fence so either the opponent must grab, or somehow remove the obstacle or go around it with a haymaker, hook or circular attack.


The opponent decides to throw a haymaker at me. I partially used "The Fence" to make the decision for him. I really really recommend "The Fence" by Geoff Thomspon if you have not read it yet. Short book but packed with great information.

I step forwards, while "chambering" for Momtong An Makki the "ji do kwan chamber". This means I stop his attack and elbow him at the same time. Incidently this is one "entry" we in Traditional Taekwondo Union practise in our one steps, as well as an entry I was taught during millitary hand to hand combat class. I see it show up in almost any art when it comes to self defense. If not this one then a close variation.

From the position in the above photo I grab the opponents free arm, to eliminate a follow up punch from him, while I flow from the "block" into an inward hammer fist strike. Targets can vary depending on situation but temple, jaw, ear and just below the ear are good targets.
From the hammmerfist you grab the opponents arm as in the photo below. This can be eliminated from app in the chaos of combat, but it is easier to grab the arm you allready know where is and it is tactically good to have some control of your opponent. This can be seen as the chamber for punch.
After securing the arm you step in and deliver a punch while pulling the opponents arm toward your hip. Not how the pull to the other hip turns the free hand of the opponent away from me.
Now you are almost in the same position as in move 2 in the form and a natural follow up can be the armbar that was shown in the previous article. This armbar can be said to be the second "long front stance, low block, middle section punch combo" in the form.


Same app from a different angle:

Kukkiwon Chamber, against a haymaker, hook or round punch toward head

The Kukkiwon chamber follows the same "logic" but is a variation, and it opens up a couple of new options too.

Below is the same idea as before. But this time you step in, block the punch and "jam" his free arm so he can not follow up. From this slightly different entry the same application flows the same way as before.

Before you start lamenting me lets get a few things clear: 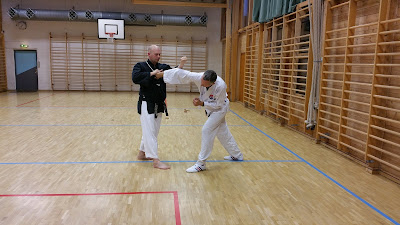 I hope this makes any kind of sense to you and I hope it is something that if you can not use then perhaps you can be inspired by it to make your own application. If you liked the application and want to see more of this in more Dojang around the world please share this post so as many people as possible can get the chance to see it ;-)
I hope you enjoyed the post. The information on this blog is provided free of charge but I would like to ask you a "favour" or "donation". If you read this post and found it informative, please share it with others on facebook, twitter, or mention the blog to a friend that you think will like it. If you are on facebook consider looking up the blog there and give it a "Like" :-) Thank you for your support :-)