Review on Taekwondo; Origins of the art: a historic photospective

Taekwon-Do - Origins of the art:

Being a self-appointed "Taekwondo-nerd" and amateur historian of Taekwondo, I noticed that the name Kim Bok Man showed up frequently during my studies of Taekwondo history. Despite his name showing up in several places, I did not really know much about him other than the fact that he was one of the original instructors of the Oh Do Kwan and close to General Choi Hong Hi during the formative years of Taekwondo. I am very interested in the history of Taekwondo (any lineage), so when I first heard about this project I anticipated opening the finished product, especially since photos and documentation in Taekwondo`s formative years (1950s to early 60s) seem to be quite rare. Being the lucky man that I am, I was asked if I was interested in doing a review for the book, to which I immediately said, «Yes!»


I have gone over the book several times now, and I must say it is quite good. Being the history buff that I am, I really enjoyed the whole book, but being a Kukki Taekwondo exponent (often wrongfully called WTF), my personal primary interest was in the early years of 1950s-1970s, before the Kukkiwon and the WTF were founded. To put the book and GM Kim Bok Man in perspective, for those who have not heard about him before (and I suspect there will be many indeed on the Kukkiwon side of Taekwondo who have not heard of GM Kim before), here is a very simplified history:


Taekwondo as we know it today, be it "ITF" or "WTF" Taekwondo, came about from the Kwan era. In the 1940s and until the end of the Korean war, several Korean martial arts schools (Kwan) were founded. Later, they organised under the KTA (Korean Taekwondo Association) which is still operational today. ITF Taekwondo was formed a few years later than the KTA and consisted of mainly instructors of the Chung Do Kwan and Oh Do Kwan.  Even later the Kukkiwon was formed as well as the WTF. Kukkiwon was to run the martial arts side of Taekwondo of the KTA and the WTF was to run the sport side of things. While the Kukkiwon was the merger of all the different Kwans, even the Chung Do Kwan and Oh Do Kwan, the ITF consisted mainly (but not only) of instructors from from the Chung Do Kwan and Oh Do Kwan. If you are researching your roots in Taekwondo far enough back in time you will eventually be led back to the KTA and the Kwans no matter from which lineage you hail. 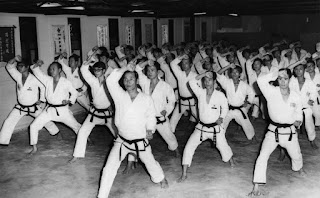 So what about GM Kim Bok Man? He was a great influence in early Taekwondo. A man who was present when Taekwondo was first demonstrated both in Korea and abroad. A man who was among the first to teach the art outside of Korea. A man who had (possibly) the most overall input on the most forms of the Chang Hon Ryu forms (ITF forms).  As he tells the story of his life, he was unique in that his earliest martial arts training was in Korean Martial Arts and not in Karate or Chinese martial arts, which was most often the case with the other pioneers. This made him a valued advisor to GM Choi Hong Hi who wanted to make Taekwondo into something uniquely Korean. He was also there and helped GM Choi Hong Hi with the very first English language book on Taekwondo in 1965.  As you can probably understand by reading this far, GM Kim Bok Man served an often overlooked but very important role in Taekwondo`s formative years, and through his efforts he influenced many who would later go on to make "modern Taekwondo."


The book is a historic photospective so you can guess that it contains many photos, and you would be correct in doing so, but there is all sorts of interesting information in it, too. Taekwondo`s birthday is said to be 11th of April 1955. It is often said to be that date because that was the date for the meeting of the famous naming committee. The meeting was in fact held in 1955 but not on Arpil 11th. I have been wondering why this date was chosen as a date for Taekwondo`s birthday for years now, but thanks to the accompinying information in the book I now know the reason why. I am not giving it away here in the review, however. The historical tidbits do not stop there, as they abound throughout the book. 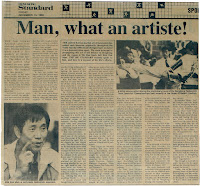 Also of interest are the several newspaper and magazine articles that are scattered around the book, giving a look at how Taekwondo and the Martial Arts were perceived at the time the articles were written.


The pictures themselves range in quality from grainy old photos in the 1950s to the great picture quality we generally enjoy now in 2015.


This is not an instructional text, which make up the bulk of Taekwondo publications. Neither is it a theory book on Taekwondo. This is a history book on one man's journey in Taekwondo from 1955 to 2015 with a lot of historical information in it. If you are a history buff like me and want to see how Taekwondo has evolved from its Karate origins in the 1950s to the unique art it is today, this is the book for you. In many ways you can safely compare the book with GM Kim Bok Man himself: A one of a kind book which details Taekwondo`s journey from its very beginning until today. Reading through it was a very humbling experience.

I hope to provide much more video content to this blog in the future. I have therefore set up a GoFundMe page on www.gofundme.com/traditionaltaekwondoramblings which I hope I can crowdfund a video editing software so I can make good quality videos for the blogs readers. If you want to contribute please visit the link to my GoFundMe page. Every donation helps :-)
Lagt inn av Ørjan Nilsen